It’s been a dramatic week in crypto, with Bitcoin finally bursting out of the symmetrical triangle that had been forming since January. The coil wound increasingly tight, and eventually sprung to the downside, leading to a 10% drop over the weekend.

This conveniently coincided with news that the South Korean exchange Coinrail had been hacked, initiating a slow bleed which has seen Bitcoin hitting a new 90 day low at the $6110 region.

Prices haven’t reached such levels since the violent shakeout in early February, which saw a low point of $5900.

Such a strong move below the $7,000 mark suggested that a speedy recovery was unlikely, as confirmed by low volume levels – which sunk to around 4.7 billion USD per 24 hour period, suggesting that capitulation was near.

Then, out of the blue, a relief rally occurred on news from the SEC that Bitcoin and Ethereum are not considered securities, propelling the price to a temporary high of $6732.

As of writing, Bitcoin is changing hands at $6575 and is facing resistance around the $6630 level. If this level is passed, further bullish momentum could bring the price to face resistance at $6950.

Should further downside be in play, then support might be found at $6530, and beyond that at the $6330 region.

As of writing, the yellow metal is changing hands at $1301. This week has been cautiously bullish, with the price edging upwards but making no major moves.

This parallels the removal of a raft of uncertainty from global political events. The lifting of sanctions after the meeting between Donald Trump and Kim Jong Un, and the scrapping of nuclear weapons, is arguably great news for the world, but not for the price of gold.

With limited upside from its appeal as a safe haven asset, the price of gold has been more influenced by economic policy. On Wednesday, a modest upward movement was seen in the wake of a hawkish fed statement announcing a slightly faster pace of interest rate hikes in 2018, and a decision by the ECB to end the post-crisis bond-buying program.

Looking to the future, a test of the all-important 200 day moving average (shown in blue) is now looking like a distinct possibility. This currently sits at the $1307 region, which has offered a significant amount of resistance as of late. If breached successfully, then it could see the commodity accelerate towards the $1314 supply zone, to potentially hit the $1325 level. 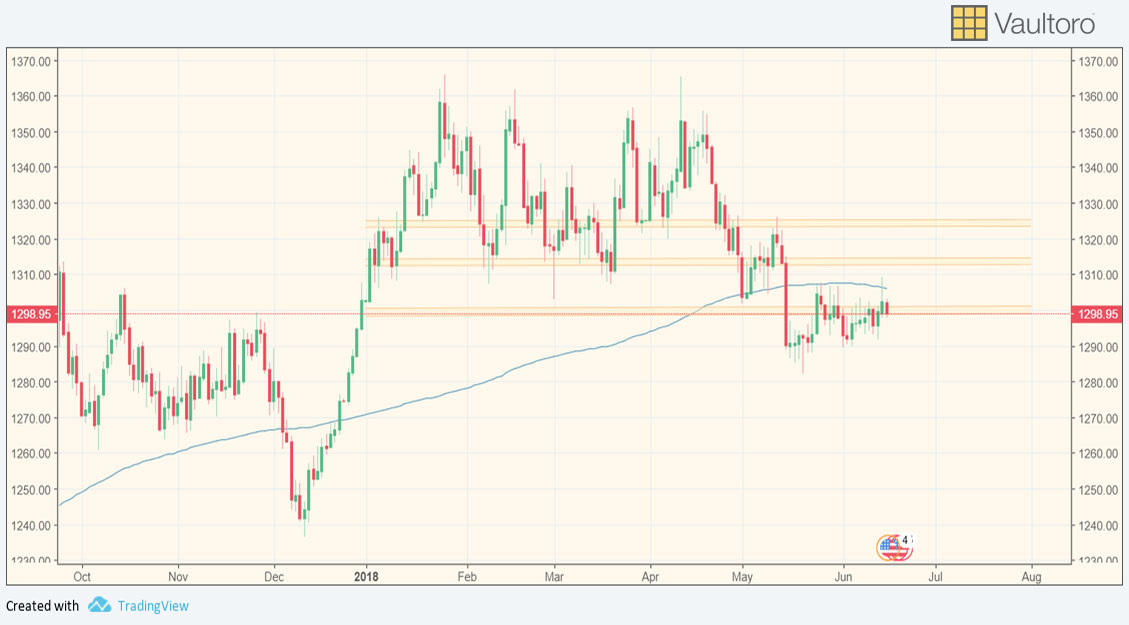 This analysis was published by bitcoin and gold exchange Vaultoro.

Disclaimer: The content of this article is merely educational, and you would be well advised to do your own research before making any financial decisions. This is not financial advice.