In an effort to document their progress and highlight key statistics, Finom AG, the blockchain holding company has released a new and their first quarterly report. Finom AG includes cryptocurrency companies TabTrader, Nanopool, FinCloud, Cryptonit, and Beetle (more about these services are down below).

Last year, the company completed a successful crowdsale of FIN tokens, raising $41 million from over 7,000 contributors. Finom issued the unique FIN security token and then did a second ICO for utility NOM tokens. The FIN security token made history as one of the first pursuant to Regulation D of the U.S. SEC.

The new quarterly report from Finom delivers some nice transparency for token holders. Eventually, the company may start to record detailed financial results. Although for now, there are no requirements to do so.

Kirill Suslov, CEO of Finom AG said, “With each new report we plan to disclose more information to you because we want you to know as much as possible about Finom. Deeper knowledge leads to insight, which in turn leads to trust.”

Besides their five active services, Finom also has three products currently under development. Below is a performance overview of the company’s operating services.

Finom AG’s main service is TabTrader, now with over 250,00 users signed up. TabTrader is a mobile terminal that allows users to trade cryptocurrency and manage accounts on the world’s 24 leading exchanges.

Most users access Bittrex through TabTrader, with 44% using TabTraber to trade on the US crypto exchange. Rounding out the top exchanges after Bittrex include, Bitfinex (9%), Poloniex (9%), and Binance (8%). There is also active TabTrader users accessing HitBTC, EXMO, Kraken, and Mercado.

Finom has as one of its main goals to increase the number of supported exchanges.

Nanopool has over 140,000 registered users and is one of the largest Ethereum mining pools in the world. They report their share of global Ethereum production to be about 15%. Since November 2017 Nanopool has seen a steady increase in users and hashrate on all its pools.

Cryptonit.net is a cryptocurrency exchange owned and managed by the British company Cryptonit Solutions, Ltd. The exchange has been running since 2012 and “has a spotless reputation.” Finom showed the exchange now has over 7,200 active users as of Q1 2018.

Beetle.io is a mobile app for purchasing Bitcoin and Ethereum with a credit or debit card, devised as a simple tool for entry into the crypto world.

With the importance of team members to Finom’s growth, they have also highlighted some impressive statistics. In September 2017, Finom had 10 departments and 42 employees. By March 2018, the company headcount grew to 103 over 17 different departments.  The charts below show the employee distribution among Finom’s departments, along with the growth occurring over six months from 10 to 17 departments. 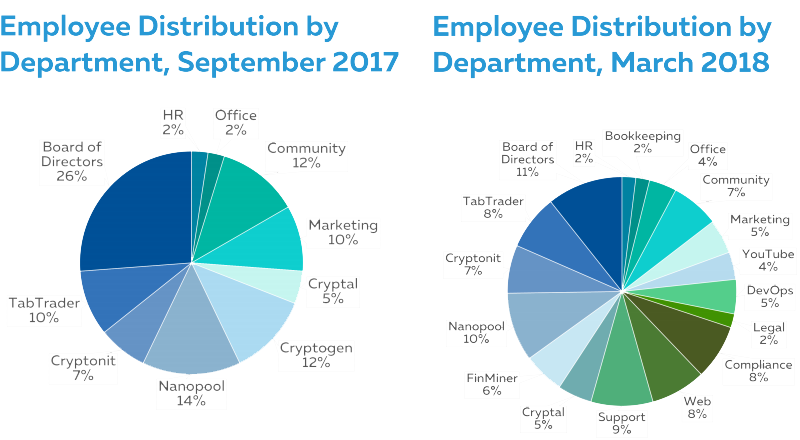 Blockchain holding company Finom AG and its mining pool Nanopool today released FinMiner, a new service which allows users to manage their mining rigs. FinMiner is a next-gen miner that is easy to set...

FinCloud, a cloud mining service by the Swiss blockchain holding company Finom AG, has begun accepting orders for the purchase of mining power. The service’s clients will begin receiving income one month after their...

Financial blockchain company Finom AG, the developer of a unified platform for mining and trading cryptocurrencies and tokens, announces the launch of NOM token crowdsale intended for private investors and the crypto community. Over...

Finom first company to increase its stock capital with ICO

Financial blockchain company Finom AG today announced it has become the first company in the world to increase its stock capital by such an unprecedented level of Ether (ETH) at 7,760 - the second...