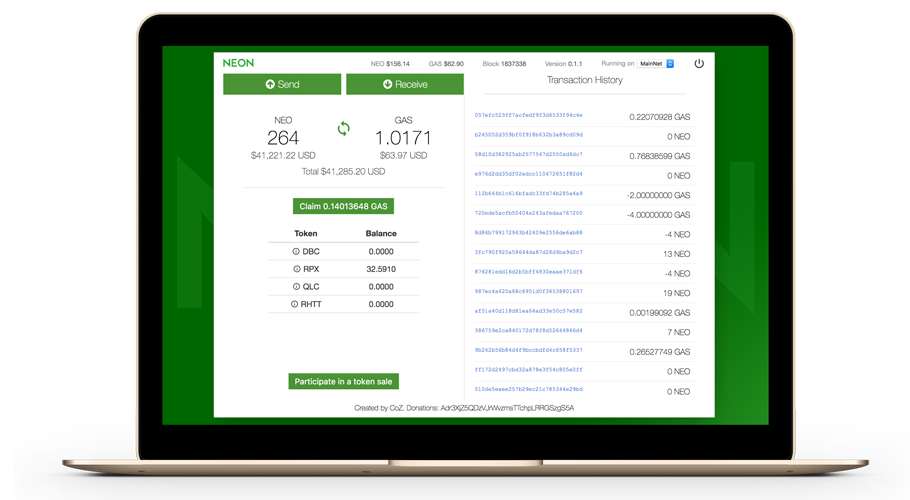 The Neon wallet app development group the City of Zion recently announced new Neon wallet versions with added support for obtaining the balance of NEP-5 tokens, participating in NEO blockchain based token sales along with some bugfixes. With the release of Neon v0.1.0 and above, Neon users will not only be able to participate in token sales based on NEO, they will also be able to receive automated refunds on nulled contributions (sold out, not reaching the cap, etc.) assuming the smart contract supports this capacity. Further, anyone can now add a NEP-5 token to the Neon client simply by adding the script hash of the smart contract.

Fixes the explorer bug, where links to the tx would always lead to the testnet (instead of the chosen network).
Allow filtering on the drop-down component, and fix a bug where using a backspace would trigger an error.
Allows NEP5 transfer to use the SC decimals, instead of a hard-coded one.
Fixes issues with NEP-5/GAS transfers.
Note that for now sending 1 RHT tokens requires you need to enter 0.00000001 instead of 1. So for example, to send 941 RHT tokens you should input 0.00000941 in the send field

Neon Wallet is an open source cross-platform light client for the NEO blockchain available on Windows, Mac OS, and Linux.