Revain, a secured by blockchain review platform announced today the release of version 0.2 of the application in less than a month after the release of its first test version on November 15th, 2017.

In addition to basic features of the test version, this version has delivered a number of new ones. First and foremost, everyone can write a review on the platform. Second, “Like” and “Dislike” buttons are now active. Third, with new functions, such as “Sell” and “Buy” you can immediately trade token on a number of exchanges. Finally, the team has introduced the button “Follow” which enables users to subscribe to receive updates from the project.

“v0.2 release is finally here and Revain team is really happy how things are going right now”, said Rinat Arslanov, CEO. “The beta version which was released a week ago generated a fair share of excitement among our community as well as helped us to perfect the final release. We are thankful to all users who tried the beta and left their feedback and we are looking forward into the future!”

Revain is a feedback platform designed for accumulating authentic user reviews on projects and startups that have concluded their crowdfunding / ICO stage. The platform is bringing to life the service that will finally allow businesses to receive detailed and genuine feedback about their projects, while users will get access to other people’s experience with ICOs and share their own insights as well. The platform aggregates information on token dynamics and major milestones in startup’s development.

Impartiality of opinions available on the platform is achieved by the fact that only well-reasoned reviews will be stored. After the platform is introduced in its full capacity, a review hash will be getting stored in the blockchain, which stands for its inalterability and no chance of making changes or deletion. 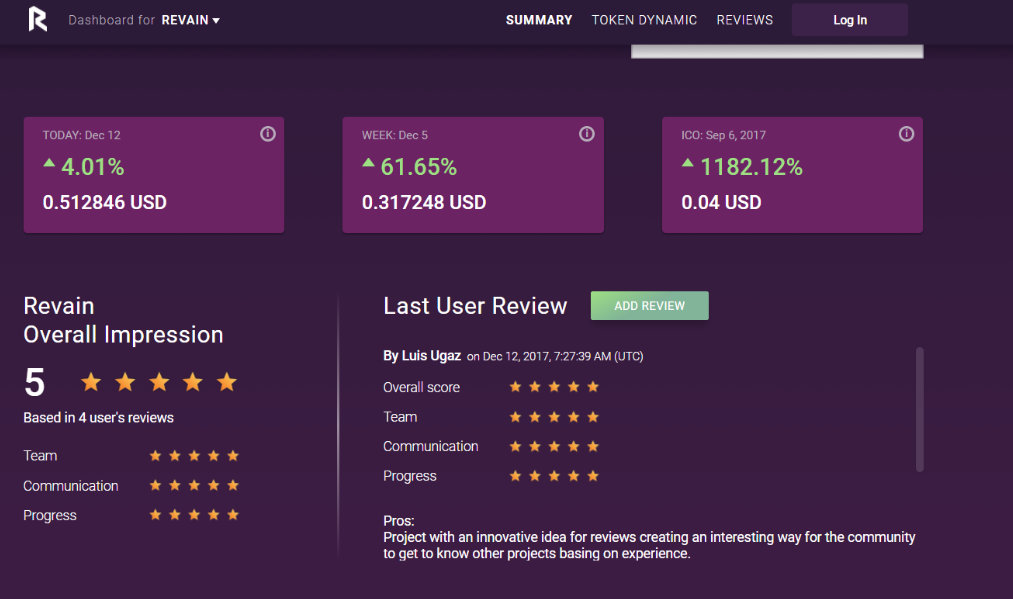 Revain announces that the Revain platform version 1.0 is out of the beta testing and now in a full-scale working version. The release of the beta version was announced on August 16th, 2018 and...

Revain announced today they are happy to roll out the newest version of its flagship Dashboard product. Version 0.7 is expanding the platform into a new exciting direction with a view to help projects...

Revain is launching version 0.6 of its platform, for the first time introducing an important new section of the Dashboard - Exchanges. Besides the major release, Revain is celebrating first 1,000 reviews posted on...

The first release of 2018 is here. Today Revain is announcing next step in the development of its blockchain-based review platform. The company just released version 0.4 of its flagship Dashboard service. After several...