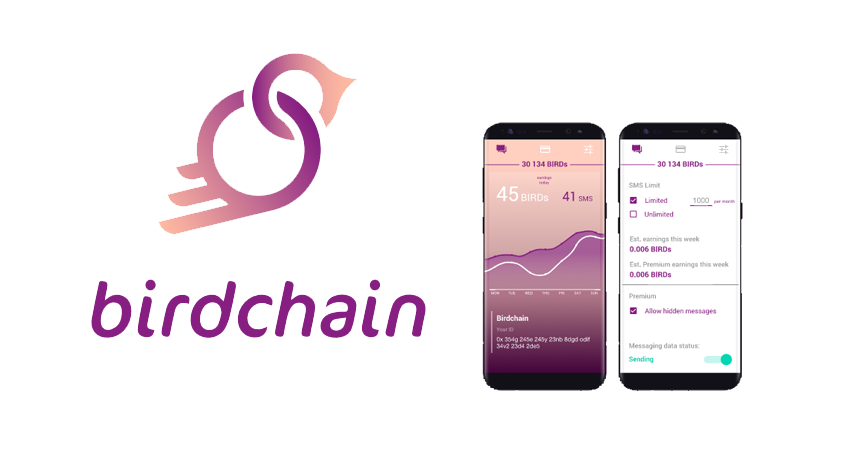 Birdchain is a new A2P SMS service developed by a Lithuania-based company Vertex which has been operating in the market as A2P SMS aggregator since 2009. Its idea is both simple and groundbreaking. Birdchain will use specific blockchain features (as well as off-chain technologies) to distribute A2P SMS through users phones. People overpay for their unlimited SMS plans because they send only 100 messages per month. Birdchain will develo an instant messaging app that will sell unused SMS for businesses and grant passive monthly income of 30-300 USD. It also means that businesses will save up to 6 times for their SMS marketing campaigns. Today single A2P SMS costs up to 0.08 euro. Their ICO will launch on November 18th.

It is important to keep in mind that as using regular A2P services, companies will have to provide their own contact list to set the campaign. Birdchain will not deliver an SMS to the contacts of the app users. It will also temporarily block incoming SMS and calls from the users which will have received transactional messages from them.

There are even more advantages for businesses. Smart contracts will guarantee that the SMS is really sent to their contact, multiple peers will increase delivery speed, and companies will not be forced to commit to the fixed amount of the messages they must send. And the regular consumers, selling their SMS, will be satisfied too, simply by not feeling ripped-off for paying for the service they do not use. Mobile service providers often offer plans with the unlimited amounts of SMS for regular users. While mobile communications remain popular and pervasive, consumers are prone to turn away from traditional SMS and find more convenient solutions for messaging their friends and family members with digital messages and media.

“People do not send SMS anymore, as it’s more convenient for everybody to simply use instant messaging apps. However, at the same time businesses pay top dollar for every single SMS message. We are developing a solution which will be useful for both parties. People will get paid for selling something they do not need while businesses will get better service and pay less.

“We have been operating in the A2P SMS market for almost ten years, and we are fed up with all of its problems. It lacks transparency, the delivery speed is rather low, while aggregators hold almost no accountability for their service and so on. Blockchain and Smart Contracts can solve all of these issues.”

In order to start profiting from the unused SMS messages, users will only have to download an instant messaging app and fix the number of SMSs they want to sell. The messages will be sold automatically in the background of the app, and the earnings will be transferred to the wallet inside the app. Transparency and fairness of the payments will be guaranteed by using smart contracts. The estimated global A2P SMS market value in 2015 was US$56 billion. It is expected to rocket up to US$84 billion by 2024.

No mining, no monstrous power consumption. Earnings simply come from selling something very well-known but rarely used – SMS messages. It is safe to say that Birdchain is bringing cryptocurrency for the people to the people. We believe that the easier it will be for people to earn cryptocurrency, also the wider and deeper will the same cryptocurrency adaptation be. And this is the point where all current cryptocurrencies are limited. In the end of the day, the success of the Birdchain will benefit the whole world of crypto. Blockchain and cryptocurrencies will become more apparent, more psychologically-friendly and – most importantly – more casual. Just like Apple was the game changer in device design by making its products more convenient, more ergonomic, and more intuitive for the end user.